You Are Here: Quantum Many-Body Systems, Entanglement and Complexity

Strongly correlated quantum many-body systems exhibit a wide range of exciting physics, such as in high-temperature superconductivity or the fractional quantum Hall effect. The key to understanding their exotic physics lies in their intricate entanglement structure. In our research, we apply tools from quantum information theory, and in particular from the theory of entanglement, to obtain an improved understanding of the physics of strongly correlated quantum systems.

A central tool in our research are Tensor Network States (TNS), and in particular Projected Entangled Pair States (PEPS). PEPS capture the entanglement structure correlated many-body systems by building the global state from local tensors, and thus reconcile the global entanglement structure with the locality of the interactions. On the one hand, they provide us with a powerful analytical toolbox to model the physics of strongly correlated systems; and on the other hand, their ability to capture the relevant entanglement efficiently makes them a powerful numerical ansatz.

In our research, we apply Projected Entangled Pair States to build a framework for a comprehensive understanding of strongly correlated phenomena such as topological order and phase transitions, protected edge states, chiral order, or the role played by symmetries in these systems. In particular, we aim to understand how the global physics of the system emerges from the local entanglement structure, with the goal of building a theory of strongly correlated matter based on local properties of the system. 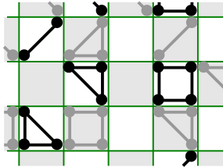 Complexity Theory assesses the hardness of computational problems. Quantum Hamiltonian Complexity is concerned with understanding the hardness of answering questions about interacting quantum many-body systems. It allows us to quantify which systems are easy and which are hard to simulate, and to understand the reason underlying the difficulty of such systems. In our research, we aim to classify the complexity of problems in quantum many-body physics. This includes problems such as determining properties of quantum spin and fermionic Hamiltonians on lattices, or the complexity of systems with commuting interactions which is believed to form an important stepping stone towards a so-called quantum PCP theorem, but also the complexity of many-electron systems as it appears e.g. in quantum chemistry.