You Are Here: Research 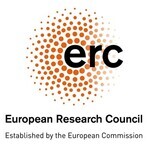 Open Quantum Neural Networks: From Fundamental Concepts to Implementations with Atoms and Photons 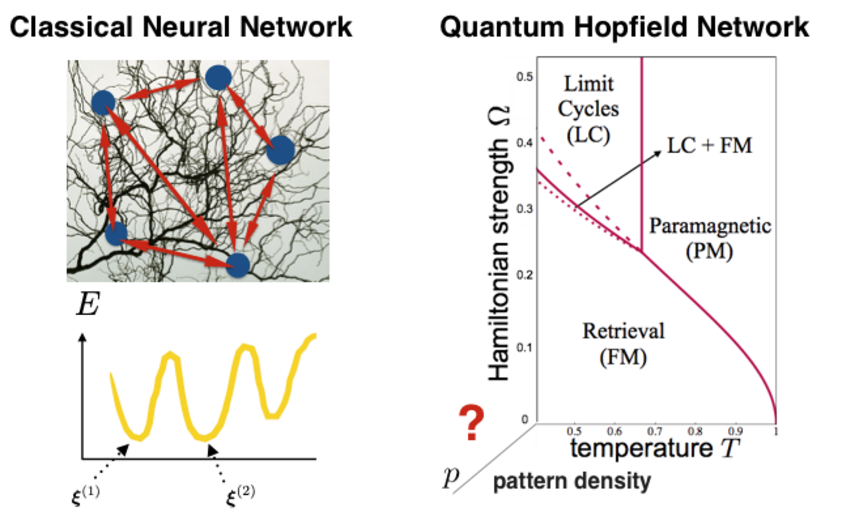 Classical neural networks, originally inspired by the neural structure of the brain, have become a powerful and ubiquitous information processing paradigm in our every day’s life. Neural-network-based algorithms and software are used with impressive success for tasks as diverse as image and speech recognition, machine learning, the analysis of ‘big data’ and ‘deep learning’. Driven by the hope of combining properties such as massive parallel information processing in neural networks with advantages like the computational speedup promised by quantum computers, there have been efforts in several directions to develop quantum neural networks.

The overarching goal of this theoretical research program, which started in October 2019, is to establish and explore a conceptual framework for quantum neural networks, based on concepts from open many-body quantum systems, and to identify quantum optical physical building blocks for the practical implementation of such a quantum processor paradigm. Thereby, the project aims at laying the foundation for quantum neuromorphic engineering of quantum neural hardware in state-of-the-art and newly emerging experimental systems, including trapped ions, Rydberg atoms and hybrid platforms.

In a recent work [1] we proposed a new framework to understand how quantum effects may impact on the dynamics of neural networks. In particular, we developed an open-system quantum generalisation of the celebrated Hopfield neural network, a simple toy model of associative memory, which allowed us to treat thermal and quantum coherent effects on the same footing.

This research is supported by ERC Starting Grant QNets. 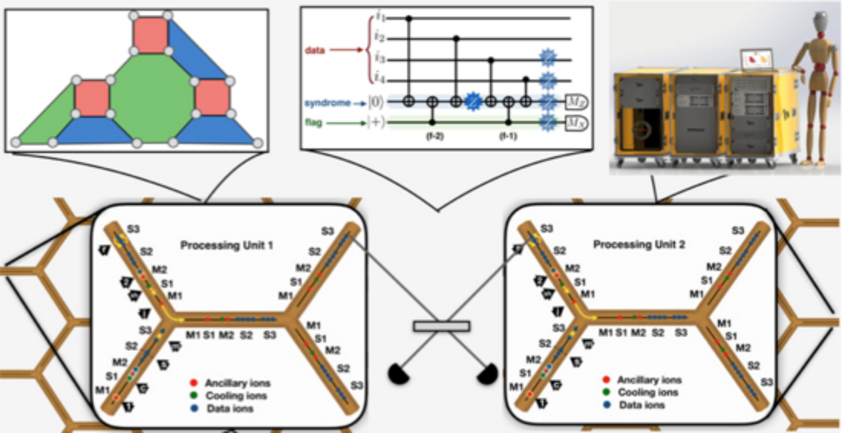 Ion-trap quantum information processors are one of the leading platforms to realise scalable quantum computers. Here, quantum information is encoded in meta-stable electronic states of electromagnetically trapped ions, which can be manipulated with high precision using laser fields to implement single- and multi-qubit gate operations. The overall goal of this project is to develop and exploit a robust, compact ion-trap quantum computing demonstrator with up to 50 qubits, based on scalable quantum hardware and industry standards. Besides our theory group at Aachen and Jülich, the project involves leading academic experimental and theoretical teams (Innsbruck University, Mainz University, ETH Zurich, Swansea University, Oxford University) who join forces with commercial leaders in the field of laser technology (TOPTICA Photonics AG), optical design (Fraunhofer Gesellschaft, IOF), and computer architectures (Bull SAS) to realize the first ion-trap quantum computer that will be able to tackle problems beyond the capabilities of classical computers. Specifically, on the theory side, we are particularly interested in developing realistic protocols for scalable topological quantum error correction and fault-tolerant quantum computing, and in investigating quantum algorithms which might enable the demonstration of a quantum advantage over their classical counterparts in medium-scale quantum processors.

Current prototype quantum computers are limited in their computational power due to errors which impedes us from reliably executing longer quantum computations. The underlying problem is that errors proliferate in large-scale quantum computation and destroy any computational advantage if left to accumulate uncontrollably. Here, fault-tolerant quantum error correction promises to detect and correct errors efficiently as they occur during storage and computation.

The main objective of the VEQTOR-project is to develop scalable tools for characterizing, predicting and validating the operational primitives of fault-tolerant quantum information processing. This requires a layered approach, which encompasses the microscopic physical level, circuit operations, smaller quantum error correction primitives and complex logical operations. In collaboration with experimental and theory colleagues from the Universities of Innsbruck (Austria), Madrid (Spain), Waterloo (Canada) and Sydney (Australia), we will develop such protocols and test them in an experimental ion-trap quantum computer featuring exceptionally low error rates.

Quantum generalisations and implementations of Hopfield and feed-forward neural networks

In this project, in collaboration with colleagues from the University of Tübingen and starting in 2021, our goal is to develop quantum mechanical versions of neural networks. However, we do not intend to do this from a quantum software perspective or as an ansatz to describe complex many-body quantum states. Rather we seek to engineer neural network dynamics at the level of quantum matter, which can be implemented as quantum mechanical many-body systems with a certain network connectivity structure between its quantum constituents. A promising architecture are Hopfield-type and rotor neural networks, which are a paradigmatic model for an associative memory: in such models learned patterns can be encoded in coupling constants between spins, and where imperfect patterns can be retrieved. Complementarily, we will investigate quantum versions of multi-layer neural networks, where network dynamics takes place between quantum neurons in different layers of a network architecture. Finally, we aim to explore experimental realisability of our ideas with cold atomic systems: For example, Rydberg atom quantum simulators or trapped-ion quantum processors provide promising platforms for physical implementations of such quantum neural networks.

Scalable quantum processors open up new opportunities for research and development, comparable to the advent of integrated circuits in the past century. The aim of this joint project is the construction and operation of an elementary quantum processor unit based on trapped atomic ions, in collaboration with academic and industrial partners from the University of Mainz, Fraunhofer-Gesellschaft, TOPTICA and AKKA. This platform has qubits with coherence times of several seconds and high quality laser-driven gates. The technological approach pursued in this project combines individual optical addressing on smaller qubit registers with the dynamic configuration of quantum registers by moving, exchanging and regrouping the ions [1]. This creates a scalable solution with high qubit connectivity. It is planned to connect the quantum processor to the Mainz high-performance computer and to make it available to external users as a user facility: First application algorithms can be from the field of quantum chemistry or optimisation. The focus of the work of our theory group will be on the development of protocols for the characterisation (benchmarking) and new methods for compiling the user-defined algorithms into sequences of available elementary ion-crystal reconfiguration steps and native gate operations.

Quantum processors are notoriously vulnerable to perturbations, with the resulting decoherence and noise preventing to date the construction of large-scale fault-tolerant quantum computers. Today, one of the most realistic and promising approaches to overcome this problem are topological quantum error correcting codes, where quantum information is stored in interacting 2D or 3D many-body quantum systems. This approach offers the highest known error thresholds, which are already today within reach of the experimental accuracy in state-of-the-art setups.

One of the outstanding challenges in quantum error correction is the realisation of logical encoded qubits, which outperform their physical constituent qubits. In this project, we develop and theoretically explore new extensible and fault-tolerant schemes to achieve such robust logical qubits [1,2], with a focus on state-of-the-art experimental segmented and multi-species ion-trap architectures. Our work on this project is realised in an international collaboration with leading experimental and theoretical groups in Innsbruck, Zurich, Mainz, Sydney, and Oxford. Here, we are interested in exploring realistic routes towards reliable operation and coupling of logical qubits. Furthermore, we are working on the microscopic modelling of experimental building blocks and the development and on the development of efficient numerical techniques to simulate logical qubits of increasing sizes. The latter tools allow one to quantitatively study the expected performance of quantum error correction protocols under realistic noise models, including e.g. quantum gate imperfections, qubit leakage and loss, and crosstalk errors, and thereby guide experimental efforts towards reliable quantum processors based on trapped ions and other physical platforms. Recently, we developed and experimentally implemented a protocol to deterministically detect and correct qubit losses [3].

This research is done in collaboration with Encoded Qubit Alive (eQual). 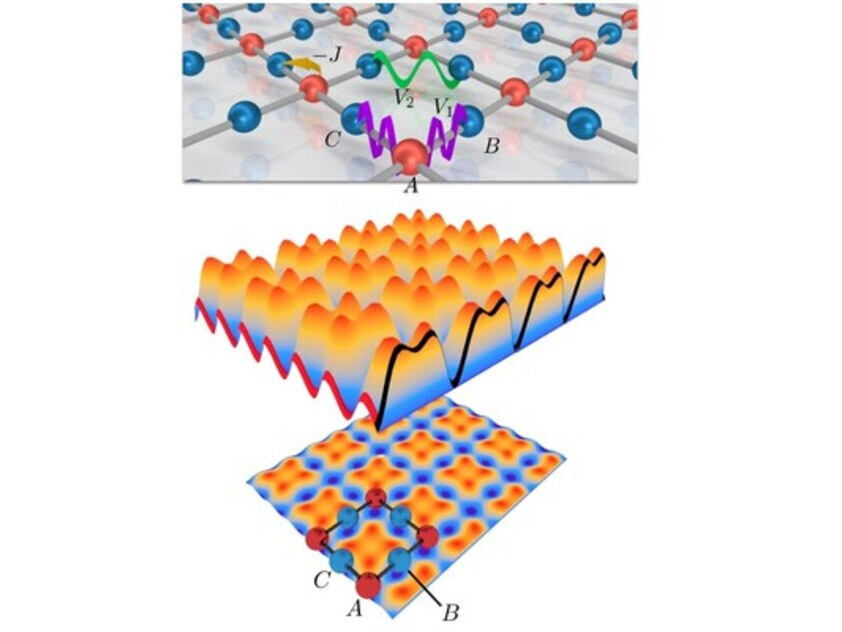 Simulating the general dynamics of interacting many-body systems can be a notoriously hard problem, even for the most powerful classical supercomputers. The idea of quantum simulators is to map the dynamics of complex, interacting many-particle quantum systems of interest onto other, controlled quantum devices, to study their properties and time evolution in a more accessible and controlled way. This provides a promising route to study otherwise intractable interacting many-body systems from various fields ranging from condensed matter, quantum chemistry, to high-energy physics and potentially even biological systems where quantum effects might play a role. Furthermore, an open-system quantum simulator [1] enables the simulation of dynamics in open quantum systems, by engineering the coupling to a tailored environment. This opens new possibilities for the study of the competition of coherent and dissipative dynamics in driven, open many-body systems [2]. Recently, along this line of research we have been interested in developing new schemes for quantum simulation of topological many-body phases such as topological Mott insulators [3] and lattice gauge theories [4] and of models of interest in high-energy physics [5], using e.g. lattices of interacting Rydberg atoms [6] and trapped ions [7].