You Are Here: GaAs Spin-Qubits 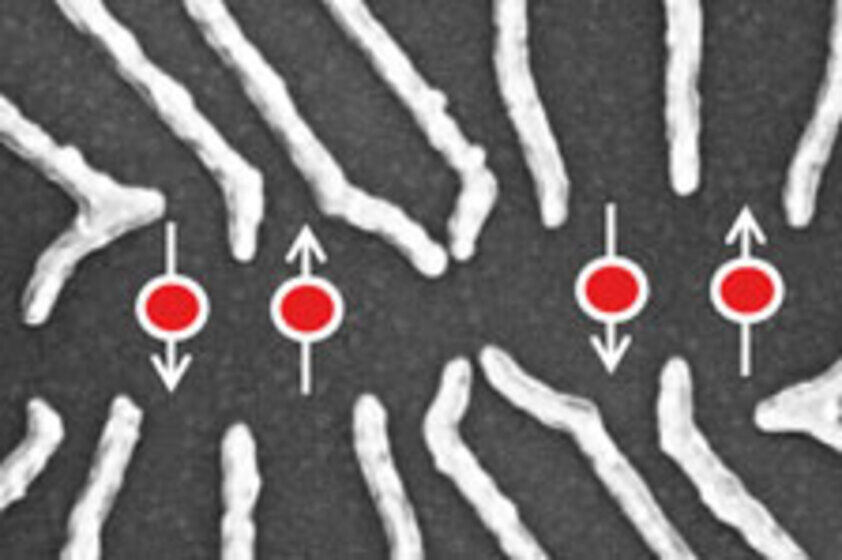 Quantum computing is expected to enable an exponential speedup for certain problems. Implementing a quantum processor requires to replace classical bits with quantum bits (qubits). One possibility for the implementation of such devices are spins in semiconductors, which are attractive because of their compatibility with current semiconductor technology. Our group studies the physics governing these devices and pursues their technological development. Specificially, we work in two different semiconductors, GaAs and SiGe. 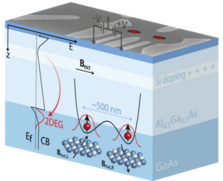 Electron spins are intrinsically two level systems and thus a natural choice for a qubit. We are studying electron spins that are localized in semiconductor structures. Starting from a two-dimensional electron gas created via band structure shaping, individual electrons are captured in an electrostatic potential defined with metallic surface gates. GaAs is a mature material system in which all the basic requirements for qubit operations have been demonstrated. We concentrate on two-electron-spin qubits, where only the two m=0 states of the two spins are used to encode a quibt [1].The exchange interaction between the two spins enables control of the qubit using electric pulses. Highlights of earlier activities include record-breaking coherence times [2] and the demonstration of entanglement of two such qubits [3]. Further optimizing one- and two-qubit operations and scaling towards a larger number of qubits are among the main goals of our group.

An important aspect of these qubits is the interaction of electrons with the nuclear spins of the host lattice. Every electron is coupled to a few million nuclear spins which create a fluctuating effective magnetic field. These fluctuation are a major source of dephasing but, they can also be used as a resource for qubit control [4]. The combined system exhibits rich quantum dynamics and can serve as a model system for fundamental studies of decoherence and open quantum systems.

We are studying both the fundamental device physics and pursuing the technological development as qubits. One focus of current activities is high fidelity qubit manipulation based on numerically optimized control pulses and in situ tuning. Theoretical results indicate that gate fidelities compatible with quantum error corrections should be achievable. Furthermore, we are developing improved dynamic nuclear polarization techniques to reduce dephasing due to nuclear spins by controlling their polarization using the qubit and exploring the limits of their performance and the properties of the resulting special, so called "narrowed" states.

We have developed new measurement schemes based on correlating the outcomes of subsequent initialize-evolve-measure-cycles that can probe the dynamics of the environment seen by a quibit over a wide range of time scales. Applied to our quibts, they reveal the importance of the Larmor precession of nuclear spins and their dephasing. Another area of interest is the interplay between nuclear spins and spin orbit coupling.

A major topic of future work will be the realization of multi-qubit circuits and the mitigation of charge noise, which is another important factor for qubit performance.